My Fourth Book, Your Century Ride 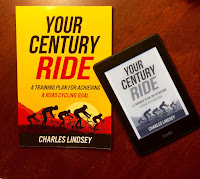 I have just finished my road cycling book. Your Century Ride is an expanded and enhanced version of my second book. It has additional chapters and more insight into how to ride a Century ride for the first time. I have met some road cyclists and non-cyclists who think that riding 100 miles in one day is a superhuman feat. Usually non-cyclists, just gawk and stare for a moment or so. With some training and planning, a Century Ride is still tough, but it is not impossible.
For years I thought that riding a Century was for other cyclists. I did not like climbing hills and did not ride much beyond 30 to 50 miles on Saturday. My fitness was fair, but not great. I saw a few charity rides in progress over the course of a season. The packs of cyclists with the ride numbers and the rest stops filled with food and water. As I began to ride further and tackle more hills, I slowly began to change my mind about participating in a charity ride.

I rode in two metric centuries first. While they were a little longer than my longest ride up to then, I enjoyed it. Especially, the social part of the ride. Getting to meet riders from all over was fun and exciting. After those first two metric centuries, I began to wonder about going the additional 38 miles to complete the whole century route. I did my first century ride in 2007. It was tough. I have included a chapter describing that ride in my book. Since then I have done at least one century every year since then. Most years I have completed multiple century rides. I finished six charity rides in 2014, and I completed my first unsupported century ride in 2016. The unsupported century ride is different from a charity ride. I go into some detail about the number of differences in the book as well.
I take the reader through the current bike choices, steel, aluminum, carbon fiber and titanium, detailing the pros and cons of each. I review the increasingly complex bike technology that has grown significantly over the last 10 years. The data available to the cyclists has grown from speed and cadence to pages and pages of bike and health data on our bike computers. I describe simple training plans and how to complete them in a manner of weeks. I take the perspective of an average cyclist who is now riding 30 miles on a typical Saturday. I am an engineer who works in an office, and I am not a former high school or college athlete who can spend hours per day training.
In the book you’ll discover:
• How to train for your century ride
• How to avoid the mistakes that could ruin your day
• How the proper bike components help and why maintenance is crucial
• How to ride with a large group of cyclists
• How to handle hills and weather along the route
• How much, and what, you should eat and drink, for the ride
• How to finish the ride strong and have fun
Now that it is winter and most of us in the Northern Hemisphere are slowing down or stopping their season, it is time to begin planning for next year. If you haven’t completed a century and plan to try, this books should be a big help. A century ride is an achievement that will amaze your family, friends, and coworkers. Nothing stops a Monday morning coffee break conversation about going to the movies, or the park, like announcing that you rode 100 miles on Saturday and that you’re fine today. That plus the fitness boost that you get will make your doctor happier. Or at least, stop the annual lectures about getting into better shape.