Posted by CR Lindsey on February 22, 2015
Casitas Pass is a climb on Highway 150 between Ojai and Carpinteria. Highway 150 roughly follows the old stagecoach road between Santa Barbara and Ojai was a part of the Camino Real. In 1891, the Ventura Bicycle Club staged an Independence Day ride between Ventura and Santa Barbara. It is a Category 3 climb with an elevation of 1,300 feet. It was the first decent climb that I ever took on. Previously, I stuck to the the flats along the beach and climbed a few Category 5 climbs. For years, I would shake my head at the “Billy Goats” heading off for the interior toward the hills and mountains. Casitas Pass is a regular part of the Amgen Tour of California, when it runs to and from Santa Barbara. This year, in the 2015 edition, it will be a KOM on Stage 5.

Casitas Pass is actually two passes, East and West Casitas Pass. East Casitas pass is the tougher of the two and it is the most scenic. At the top you get a grand view of Lake Casitas and the Topatopa Mountains beyond, including Hines Peak. Riders that are new to the Ojai Valley Century sometimes think that once over East Casitas Pass, the climbing is over for a while until the road begins to tilt up again after a short five minute descent.

Because Ventura County’s geography, there are a number of micro-climates here. Temperature, cloud cover, wind speed and direction can vary from location to location, often within a few miles. In the summer, typically, the Ojai and Lake Casitas areas will be cloudless, less windy and up to 20 degrees warmer than the beach. So it could be very warm and the air very still as you climb up East Casitas Pass. West Casitas Pass is usually cooler, being closer to the ocean and it is mostly tree-lined. No matter how tough the climb may be, relief is only a couple of miles away with a long descent toward the ocean.
Passing by the Lake Casitas recreation area on Highway 150, you will hit a long roller until you see Lake Casitas, or what is left of it. After four years of drought, the lake is down almost 50%. For me, the climb begins at the Casitas Station, a fire station. Most of the time, I’ll stop in for a quick rest stop. CalTrans laid chip seal from Lake Casitas all the way to near the beach, so it is a small break from the road buzz. The first up and down is about 6 to 7%, and about a mile long. then there is a fast and straight descent. 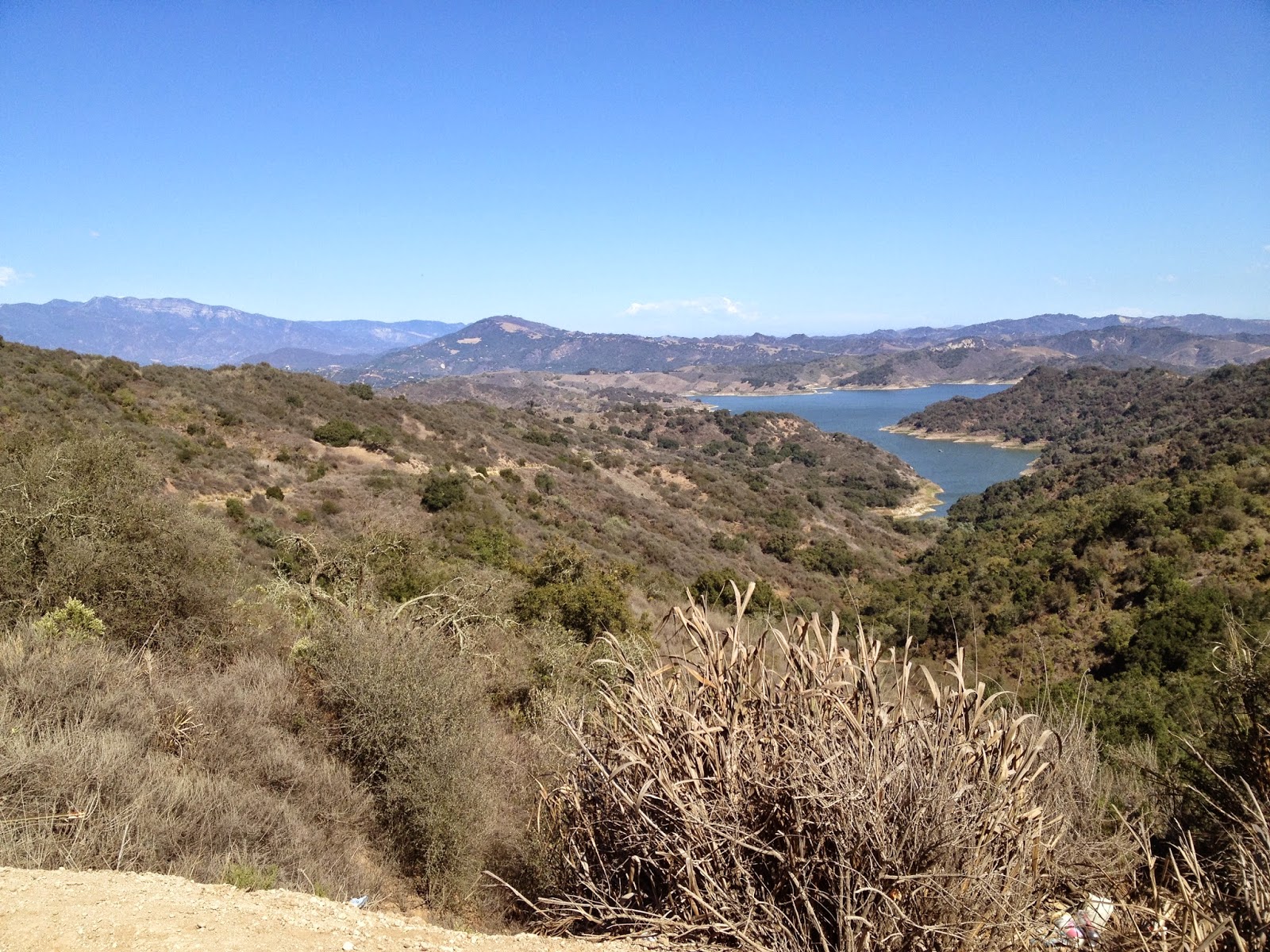 Near the bottom of the descent, you will see Mile Marker 7, where the main climb begins. The summit is at Mile Marker 4.5. It starts off gently at first, so you can start off fast. At the first corning, you can look up and briefly see the top of the climb. There is a small building and and light-colored rocks next to it. My first reaction, years ago, was a little disheartening, because it seemed so far away. At this point, the grade runs up to 7 to 8% and stays there for the next 2 miles. Another element to watch out for is that there is no road shoulder and not a lot of space off of the road in many spots.That combined with the blind curves means that cars, trucks and motorcycle clubs can be top of you very quickly. I tend not to linger in the curves. At mile 5 the grade levels off to 5 to 6%. By comparison, the pros in the Tour of California were going at 16 miles per hour at this point. At the top, you can pull over and take in the view of the lake.
The descent has two curves near the top where you might want to watch your speed. but the curves straighten out and you can open it up. After a short five minute descent, the climbing begins again up to West Casitas Pass.
This climb is shorter and the grade not quite as steep. And fortunately, tree-lined most of the way. The earlier climb is out in the sun. You cannot see the top of the climb, because of the trees and curves. It reminds me a little bit of the Rock Store Climb on the Mulholland Highway, but much shorter. When you see two large 25 miles per hour signs, the top is about 100 feet beyond the second sign. Then you have a long descent down to Gobenador Canyon Road, Highway 192 and Carpinteria. Gobenador Canyon Road is a quick right hand turn and another climb, a Category 5 with a steep descent down to Highway 192. At that intersection, there is a water fountain with a filter. It has the best water for miles. You can pass by Gobenador and take Highway 192 along the backside of Carpinteria, which is the route of Stage 6 of the Tour of California, in reverse. Or you can continue to the beach by staying on the road and going up a short hill.