My wife loves spin class and is good at it.  She has been encouraged to become an instructor. But she is very reluctant to ride with me out on the road. Primarily, she is worried about road traffic. I imagine that some people in Southern California worry about riding on the roads along with cars and trucks. A separated path for bicycles and pedestrians, designated a Class I bike path by the California DMV, are a calm, quiet alternative for some cyclists.
Ventura County has around 60 miles of Class I bike paths throughout the county, in all of the county cities, except for Port Hueneme, and in unincorporated areas. The City of Ventura has 20 miles of Class I bike paths within its borders. I have ridden on many of them over the years, and I will describe the longer trails that I have been on.

Currently, only three miles currently exist of a much bigger proposed bike path. The bike path today runs along Main Street, from the western edge of downtown Santa Paula, from Peck Street to the Santa Paula Railway Station next to Highway 150.  While it is a Class I path, it does cross many intersections as it passes through Santa Paula. In the future, there are plans to extend the bike path along the old Santa Paula Branch line between Fillmore and Ventura. This would create a 32-mile long route through mostly citrus farms. 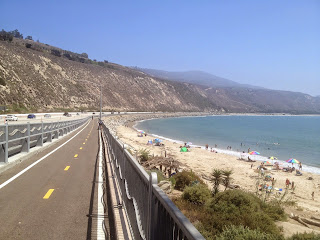 The Ralph Fertig Memorial Bike Path is named for one of the founding members of the Santa Barbara Bicycle Coalition. Mr. Fertig was a powerful advocate for bike trails and lanes in Santa Barbara County. This 10 ft. wide, 3.6-mile path runs from Mussel Shoals to Bates Road at the Santa Barbara County Line past La Conchita. This path replaced the worrisome route of riding on the shoulder of US 101. Cars and trucks would pass me by at 60 miles per hour. Now a decorative, but stout, steel fence separates the bike path from the highway traffic as the bike path goes along the beach. The amount of people riding, and walking, along the path is much more than what it used to be. There is a sea breeze providing a tailwind for those cyclists heading to Ventura. In 2016, this bike path won a The Bicycle Pedestrian Project of the Year Award from the California Transportation Foundation. 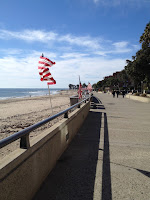 Only 9 miles of the Rincon Highway separate the Ralph Fertig Memorial Bike Path and the Omer Rains Coastal Bikeway in Ventura. There is light, mostly local traffic on the Rincon Highway, so if you wish, you can ride from the end of the Ralph Fertig Bike Path in Mussel Shoals to Ventura, past Mondos Beach, the beach where many local surfers learn to surf. Omer Rains was a California Senator for three terms and an environmentalist. The 8-mile bike path begins at the end of Rincon Highway, passes above Emma Wood State Beach and beside Main Street in Ventura across the Main Street Bridge over the Ventura River. At this point, you can continue on the bike path by turning right, and then the bike path will take you along the beach past the Ventura County Fairgrounds to the Ventura Pier and the Class I bike path ends at the eastern end of Ventura State Beach. The bike path continues a few more miles as a Class II bike path through the Ventura Keys area, finally ending at the entrance of Ventura Harbor at Olivas Park Road. On weekends, there are some joggers and other cyclists on the path at Emma Wood State Beach, and there are a lot of pedestrians along the Promenade, and near the Pier, so you have to have a little patience. But it is mostly flat, and it runs along the ocean with surfers, kitesurfers, and a few restaurants along the way.

The 15 mile Ventura River Parkway Trail combines the 6 mile Ventura River Trail running from the end of the Main Street Bridge in Ventura (connecting to the Omer Rains bike path) to Foster Park and the 9 mile Ojai Valley Trail that runs from Foster Park to Fox Street in Ojai. This bike path is a Rails to Trails bike path. The old Southern Pacific line carrying citrus from Ojai to the main line in Ventura is mostly 2 to 6% grade, raising from about 30 feet to 800 ft in Ojai. The first two blocks in Ventura, past Patagonia headquarters and store (Great Pacific Iron Works), is a Class II bike path for about two blocks, then it becomes a Class I up to Ojai. The route passes through the older industrial part of Ventura for 4 miles and then it becomes rural and scenic. As you slowly ride up to Ojai, the views become better and better. The traffic is mostly cyclists, occasional runners, and some hikers, but light overall. Two things to watch for are the temperature difference between Ventura and Ojai and the wind. In Ventura, it can be 65 degrees, cloudy and breezy, while in Ojai, it can be 85, or higher, cloudless and windless. The wind will pick up as the day wears on, rolling up the valley from the ocean. The valley narrows at Foster Park so the headwind coming up from the ocean can be bothersome (a steady 10 to 12 miles per hour) if you are tired. The wind will be a small factor from Foster Park until you get back to the beach.