Portions of this route have been a part of past Amgen Tour of California (ATOC) stages for years and will pass through our area again this year. The route is very scenic and you can see (and smell) bits of California history along the way.
This is a 50-mile loop, plus or minus a few miles. Whether you ride the loop clockwise or counterclockwise is dependent on the weather, specifically the wind direction. Ventura to Santa Paula is primarily East - West and a strong wind off of the ocean will help a cyclist going counterclockwise. A strong Santa Ana will help a cyclist going clockwise. I would mush rather a tailwind going to Santa Paula from Ventura then slog through a headwind for 9 miles.
Most of the route from Ventura to Santa Paula runs along fruit orchards with small rolling hills after you get through Ventura. Fruit orchards are an enduring part of California history and current water shortage controversy. From what I can tell, the farmers here use drip irrigation since I can hear a faint hissing sound coming from the orchards.


Rolling into Santa Paula is a step back in time somewhat. It is a town that has not lost its small town feel. Once you get past the 1970s tract homes on Santa Paula Road, you'll see Craftsman style homes
from the early 20th century as you get closer to the center of town. At the intersection of Santa Paula Road and Ojai Road, you can turn right and head for the old train station, where there are restroom and water fountains. Turning left onto Ojai Road, or Highway 150, begin the climb up to the Upper Ojai Valley.
This is an 8-mile climb with the first 4 miles running about 4% grade, plus or minus 2%. 4 miles will take you to Steckel Park. The ATOC normally goes north to south and, therefore, the peloton goes down the grade. But Stage 4 of the Tour of California went up this grade instead. If you look at the Strava segment for the climb you will see a bunch of pro racers at the top of the list with the same day listed. They cruised up this climb at 16 miles per hour. You don't have bragging sessions in the local bike shops about KOMs here. Between the annual visits from the ATOC and pro teams training here in winter, there is little room at the top of KOMs for us mere mortals. 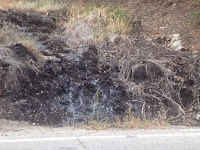 If is summer time you will notice a gradual but definite climb in the temperature. I have noted temperature increases of twenty degrees between the beginning and the top. The other thing to notice is the smell of sulphur or a rotten egg odor. The odor comes from oil seeps in the area around the small valley. Oil seeps are where oil oozes out of the ground, the most famous in Southern California is the La Brea Tar Pits in Los Angeles. Oil production began in the 1920s and has continued to the present.
After a slight downhill section at mile 4, you'll see Thomas Aquinas College, a small Roman Catholic Liberal Arts college. The grade ramps up to about 6% for the remaining 3 miles of the climb. The climb has more trees at this point obscuring the top of the climb. So around every bend there seems to be just a little bit more climbing ahead of you. Occasionally the road will pass in and out from under the trees. On a hot day, it can feel like a heat ray is focused on you when pass through the sun-drenched patched. It can be 10 to 20 degrees hotter than in Santa Paula just a few miles to the south. The ocean breeze there does not make it to the upper stretches of this climb.
When you get to The Summit, you are at the top of the climb at 1,587 feet. The KOM line for the ATOC was right in front of The Summit. Next to The Summit across Topa Lane is a general store called the Stagecoach Station, where I have stopped a few times to grab a cold Gatorade, when the temperature on the climb was well above what I started out with in Ventura on the beach. If you look north down Topa Lane, you will see Hines Peak directly in front of you. Hines Peak is visible across the Oxnard Plain. From here back to Ventura, it is mostly downhill.
Scooting across the Upper Ojai Valley is fun and quiet. There is not a lot of traffic here and the farm and ranches are very large across the 3-mile stretch. I saw a golden eagle once up here, a large brown bird with a large wingspan swooping across the valley.
After a short uphill section, you hit Dennison Grade, a one-mile descent with lots of twists and hairpins. This is one descent that you can go faster than a car on the downhill. I passed a car once before and others have too. One thing to look out for is cars turning left onto Reeves Road at the bottom of the descent just past Boccali's Pizza. Then it is on to Ojai itself, either down Highway 150, through downtown or down Grand Avenue, one block to the north of Highway 150, which has much less traffic.After cutting through downtown Ojai, I usually go back to Ventura down the Ojai Valley Trail. The Ojai Valley Trail is mostly downhill, with a 900 foot descent over 15 miles, usually with a headwind.
This year, the ATOC will pass through this route on the way to Santa Clarita. An excellent place to see the peleton would be at the top of Dennison Grade. You can park at Dennison Park and walk to the top of the climb. 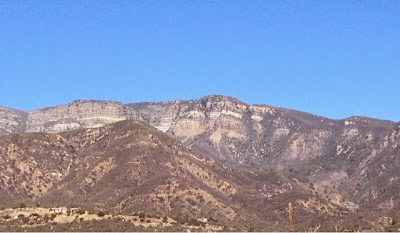