I consider the Gilbraltar Road Climb to be one of the toughest climbs in the Santa Barbara/Ventura area. Only Mount Figueroa in the Santa Ynez Valley above Solvang comes close. While Mt. Fig is longer, Gilbraltar Road is steeper. Bicycling Magazine featured it in December 2014 as one of the five best scenic rides in America. It is also a featured part of the tough Santa Barbara Century. The pain of climbing steadily for 8 miles is more than matched by the panoramic view of Santa Barbara and the Pacific Ocean.

I normally start at Manning Park off of San Ysidro Road in Montecito. It is normally a quiet park with plenty of parking and public restroom at the far end. The gentle climbs through Montecito is a good warm up for the effort to come. The climb starts at the intersection of West Mountain Drive and Las Canoas Road near Skofield Park. After Cielto Road, the next intersection is Camino Cielo, 6.5 miles away. There is no water available and no facilities. There is little traffic, but enough cars do up and down where you need to keep to the side of the road. And because of the switchbacks, cars can appear suddenly.
The climb starts out at 6 to 10%, mostly around 8%. The pavement is fairly smooth at this point.
Along the first 3 miles, you will encounter small sections where the roads looks like a wall in front of you. Along this stretch, you can look up ahead and see parts of the road ahead by looking for guardrails above you. Usually, there is a cool breeze coming up the hillside here. Sometimes there are low clouds or fog, will cover the lower slopes with the upper part in the warm sun.
You can see faint traces of the Jesusita Fire that rolled through this area in 2009, here and there. Up to about 3 miles, there are a few houses along the way. I can't imagine living up here. One the views would distract me all day and night, but more importantly, it's a long way to the store, or anywhere, and if it rains, or worse, 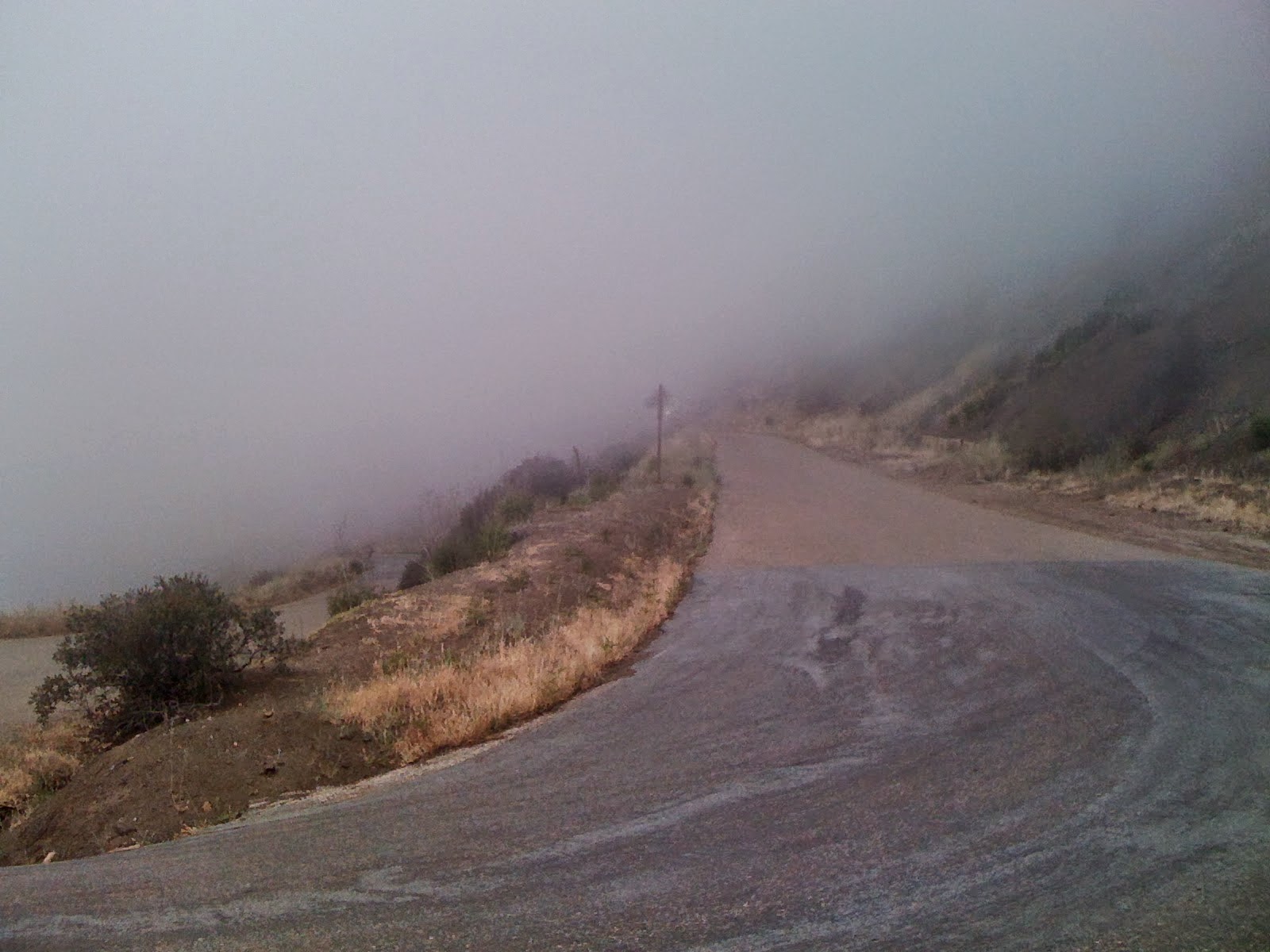 if there is another fire, it has to be scary up here. At about 3 miles in, you will reach a sharp switchback, that looks like a large U. From here the pavement gets rougher. The asphalt has been patched numerous times, to where it is patches on patches in some spots. On the way up it is annoying, on the way down, it is more of a problem. And it gets warmer, the breeze doesn't quite get to the road and insects seem to swarm around more, especially in the summer. In the next 2 miles, you'll see the hand glider folks and the rock climbers. It's so quiet up here, you can hear the hang glider slipping through the air above you and 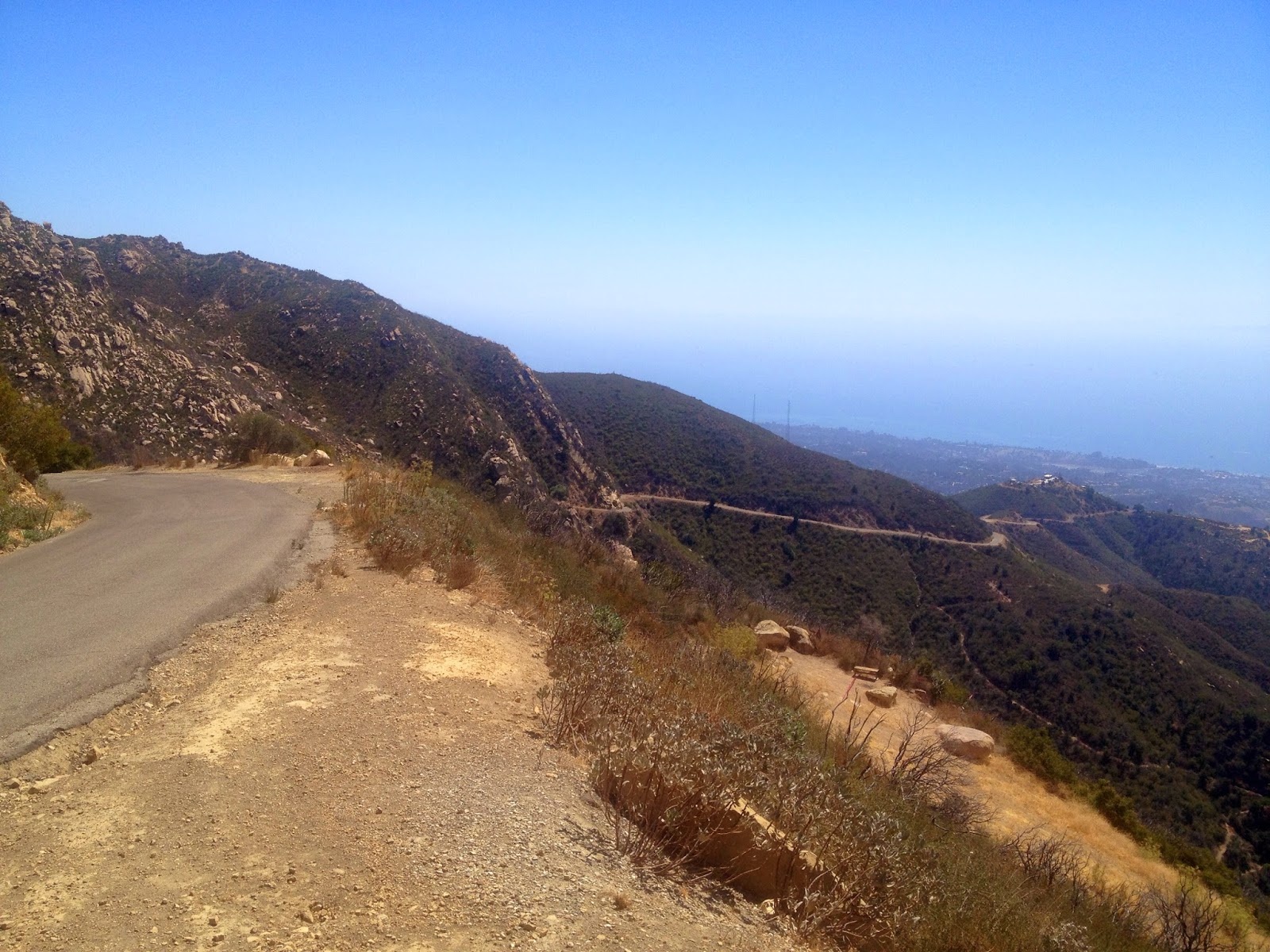 sometimes you can hear the hang gliders themselves chatting with each other.
Right at Mile 5, you hit Flores Flat, a small collection of houses and the only descent of the climb. It's very short and there are a few trees to rest under. The next section is the steepest of the ride and it is known locally as the 'Wall'. It cranks up to 10 to 15% and stays above 10% for almost a mile. This is where my power meter and bike computer help me out the most. I keep an eye on my power output and balance that against my heart rate. Despite the effort, I know that I may have more to put in, based on the computer numbers. Knowing this, I can ignore my legs telling me to walk it for a while and continue on. The
suffering will not be over until you reach a saddle point were the grade goes to 4% for a short bit. You'll never be so glad to see a 4% grade in your life. Some riders stop at Flores Flat and call it a day. And during the Santa Barbara Century, I have seen people walk it. Beyond that, it is only one mile to the end of Gilbraltar. At 8 to 10%. You can see Camino Cielo on the hillside above and that is what I try to focus on. Once you get the intersection you are at about 3,300 feet up and you can go to the right on Camino Cielo and ride along the ridge above Santa Barbara and Montecito for a few miles. Eventually, it turns into a unpaved fire road. To the left is La Cumbre Peak, the highest peak above the
city at 3,900 feet. After a short descent, you start climbing again, at 8 to 10% again. You'll start to climb into a small pine forest which covers the top of the hill. This last stretch seems to go on and on. I guess that it is because there are trees lining the road up and therefore it is tough to really get a sense of getting anywhere.
If you stop at Camino Cielo and do not go on to La Cumbre Peak, you have completed a Category 1 climb. Going up to La Cumbre Peak is hors catégorie. You can go back down Gilbraltar, but with the hairpin turns and the rough pavement, you have to stay on the brakes most of the way down. A number of people keep going 'across the top' to Painted Cave Road three miles away to descend from this ridge. There are two Category 5 hills along this way, but the majority of this route is downhill. And you will be able to see Santa Barbara on one side of the road and Lake Cachuma and the Santa Ynez Valley on the other.Take Painted Cave Road down to where
it intersects Highway 154, (it is a steep and fast descent to that intersection, 154 traffic does not stop and is moving at 50 mph). Stop at that intersection, then cross over to Old San Marcos Road for the rest of the descent to Cathedral Oaks Road (Highway 192). Both Painted Cave Road and Old San Marcos Road have better pavement than Gilbraltar but  are known for very sharp switchbacks and narrow lanes. Again, there are great views on the way down.
Climbs Rides