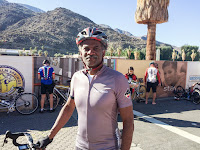 I am a 54-year-old road cyclist living on the Pacific Coast in Oxnard, California, between Los Angeles and Santa Barbara. I started riding to improve my fitness about 20 years ago. I was drifting toward being an overweight couch potato when I decided to ride once a week on Saturday. Then I began to ride during the week as well. Now I ride three to five times a week year round. There is no off-season in Southern California, only occasional rain during the winter. Or at least before the drought. We have flat routes and hills here in this area. Some pro cycling teams train here during the winter. The Amgen Tour of California regularly passes through the county. It helps to have the primary sponsor, Amgen, headquartered here.

I ride a 2010 Trek Project One Madone, with an SRAM Red 22 groupset, Bontrager Aeolus D3 carbon wheelset, Garmin 510 bike computer, and a Stages power meter. I have gone from a 40-pound steel bike in high school to a 15-pound carbon fiber bike.
I rode a lot before college. I rode my first half-century in my senior year. I put cycling aside for years. But after getting the job, getting married and having kids, I was out of shape. I got back on the road with a bike given to me by a co-worker. And it brought back the fun of cycling and discovering things around the area that I couldn't see zipping by in a car at 30 mph. I gradually increased the distances that I rode and bought more and more biking accessories, helmet, shorts, jerseys, shoes and such. Now I know that the upgrades never end. 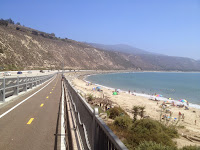 I began by not tackling the hills, staying on the flats. After some training, I can take on all categories
of hills, but I still don't enjoy them. I do like the descents, however. Lately, with the help of my Stages Power Meter, I have been able to enhance my training rides during the week. I have been increasing the intensity of my training rides using the Intensity Factor calculation displayed on my Garmin. These training rides have had a positive effect on my overall fitness and performance on my longer Saturday rides. My speed is slowly increasing, and my cardio has improved. This year I plan to ride with more intensity and variety of routes than just piling on the miles.

One day soon, I hope to travel to the French Alps and take on Alpe d'Huez.