SRAM's Red eTap AXS
And the limits of upgrading 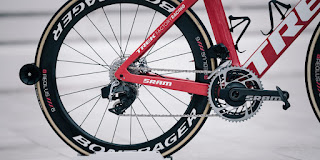 SRAM introduced its new and innovative Red eTap AXS. SRAM added a 12th gear like Campagnolo did earlier. And like Campy, that 12 gear cassette can be used in current bike frames. Beyond that SRAM  brought new ideas to the groupset and more technology. DC Rainmaker reviews technical cycling components like bike computers and such. He has a review and a 13-minute video on this groupset covering the AXS app, the ability to change the way you can interact with the groupset and power meters.
Briefly, starting from the most significant innovation; a new concept of gearing. The new rear cassettes run from:

These cassettes require a new freehub body, the XDR driver (adapted from it off-road XD Driver). The front chainrings are now;

Each has a jump of 13 teeth, versus the traditional 16 tooth jump with 50/34. The front chainrings are no longer bolted together. The rings are formed from a single block of aluminum, like the Red rear cassette. This saves weight and makes the chainrings stronger. Also, you can swap out the double chainring for a single chainring without changing the rear derailleur. You can order Quarq DZero power meters with this groupset. The new chainring has the DZero are a single integrated unit.

To retain chain tension on rough terrains, like gravel, the rear derailleur has a fluid damper at the top jockey wheel axle, called Orbit. It takes the place of the clutch used in 1x chainring drivetrain.
Another innovation is the new thinner chain, due to the smaller spacing between gears. The chain has a flat top look, placing more material in each link instead of the traditional barbell look of chain links. The shifters have been redesigned, making them a little smaller, with a new grip pattern on the hoods and levers.


However, for all of this innovation, the groupset ranges in price from $2,800 to $4,100.
For many cyclists, this is how much their bikes costs, if not more. As a comparison, the 2019
Trek Madone SLR Frameset is $3,900. While bike frames prices have remained somewhat level over the last 10 to 15 years, the components have taken off in price and technology. The focus is shifting from the bike frames to the components like bike computers with mapping, social media links, and wi-fi.
Meanwhile, bike frame design is based on two triangles with a fork out front. The basic frame material; either aluminum or carbon fiber have been in use for 40 and 25 years respectively. One reason why bike prices have remained mostly flat at the top end is that there is real differentiation between the various brands. Some bike firms use limited availability to raise prices such as the Colnago Ottanta5 which retails for $16,000 at some e-stores.
So innovation has shifted to bike computers, power meters, groupsets, bike lights that sense oncoming cars and adjust lighting to sunsets and speed. And component and accessory pricing is rising. Now the best way for bike shops to get customers to come back is to push the latest tech gadget like the $200 Quarq TyreWiz Air Pressure Sensor which will report your tire pressures on your Garmin and Wahoo bike computers.
Gear

Colnago C60 ReviewI test rode the Colnago C60 in Santa Monica. This demo ride was a part of my continuing search for a replacement of my Project One Trek Madone 6.5. I had read all of the glowing reviews of this bicycle and was eager to see if the reviews were a rewrite of Colnago marketing or real. After riding up and down Broadway and Santa Monica Boulevard, I can see that the C60 is an impressive ride.The C60 was quick, responsive and felt solid.