Over the course of years, I have had close encounters with cars, trucks, buses, and RVs. This Saturday, however, I had a driver deliberately drive within 6 inches or so of me. It was a dangerous and deliberate act. The road was straight, with two lanes in either direction and the lane next to him was clear. And it was midday. 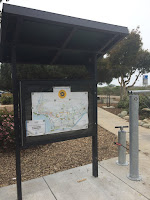 In California, there is a 3-foot bicycle passing law, that has been in effect since 2014 (Cal Veh. Code § 21760).  Currently, 30 states have 3ft passing laws protecting cyclists. North Carolina has a 2ft passing law, and Pennsylvania has a 4 ft passing law. South Dakota has a two-tier passing law, with a three-foot passing requirement for roads with speed limits equal to or under thirty-five miles per hour and six feet on roads that have speed limits greater than thirty-five mph. New York has a 'safe distance‘ rule in place, New Jersey has no law.
In general, here in here in Ventura and Santa Barbara Counties and the cities within the counties encourage road cycling. There are bike paths, 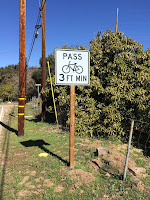 well-marked roads, the police support cyclists as well. Also, the road cyclists here are an activist and vocal bunch. The local bicycle clubs work with the local governments to improve the infrastructure and promote safe cycling. Ventura County is installing bicycle repair stations and is adding public restrooms and water fountains to a couple of remote County fire stations.
So it was shocking to be riding along Cabrillo Boulevard in Santa Barbara, in front of the East Beach Volleyball courts and have a Honda Accord hood basically appearing beneath my handlebars. Now, I’ve had cars pass close by me many, many times. Usually, any cars passing within 2 to 3 ft, I think of them being a jerk. But this car appeared beneath my left elbow. I still don't know how his passenger side mirror missing my handlebars, or my pedals didn’t hit his fender or door panel.

I was angry. After thinking about it, I decided to go on up the road to a nearby shopping center hoping that he had parked there to go shopping. What I would have done if I had caught sight of the car I don’t know. At the same time, I thought that maybe I could run into a police officer. Clearly, this driver was a danger to me and possibly a danger to some other cyclists.